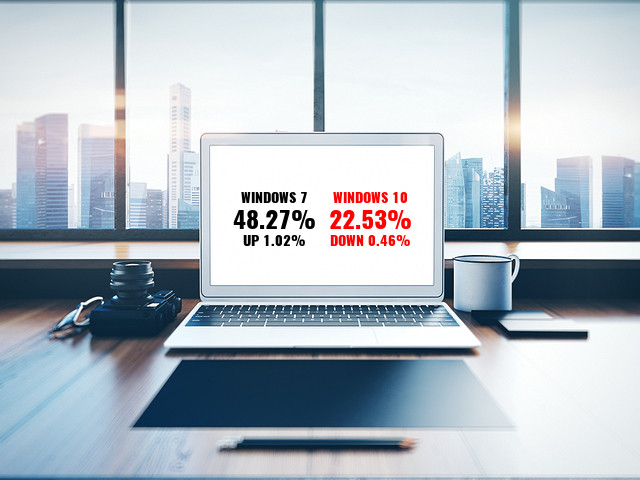 A Surprise Fall? The market share scores on the doors aren’t particularly good for Microsoft. Image by Sfio Cracho (via Shutterstock).

With Microsoft shipping Windows 10 for free on all PCs with Windows 7 and 8.x operating systems, you would have thought Windows 10 would be the world’s leading OS. It is hailed by some as the most robust version of Windows, given how the creases were ironed out from Windows 8 and 8.1. How wrong we were, as recent figures from Net Applications’ Netmarketshare have suggested otherwise. Market share in Microsoft’s latest version of Windows actually fell.

Windows 10 saw a 0.46% drop in market share with 22.53% of users. The world’s most popular operating system remains Windows 7. With a market share of 48.27%, it rose by 1.02%. Perhaps its rise is due to one thing: users whose peripherals came to grief after the Windows 10 Anniversary Update (mentioned in a previous Tabard IT blog post).

Windows XP holds its own

It has been stated in another report than 42 NHS Clinical Commissioning Groups still use Windows XP. As well as issues with peripherals, software compatibility is another one. The fifteen-year-old operating system – well and truly obsolete – has a market share of 9.11%. Which, believe it or not, is 2.8% more than all versions of MacOS.

Not so good on the browser front

Since June of this year, Netmarketshare results have seen Google Chrome becoming the world’s favourite web browser. All of which at the expense of Firefox and Internet Explorer. In May 2016, the two browsers were almost neck and neck. Last month’s figures see Chrome on 54.43% and all versions of Internet Explorer down to 25.48% – in a distant second place.

Internet Explorer’s successor, Edge, saw a gradual rise in the first part of 2016, before flatlining from May onwards. With a share of 5.16%, the response seems underwhelming. Besides the rise of Google Chrome, Firefox enjoyed a surge in market share within the last month of Netmarketshare’s survey: a rise from 7.6% to 9.16%.

What’s your opinion of Windows 10?

Feel free to air your views on the operating system. Is your experience a joyous one, or have you reverted to an older version of Windows?